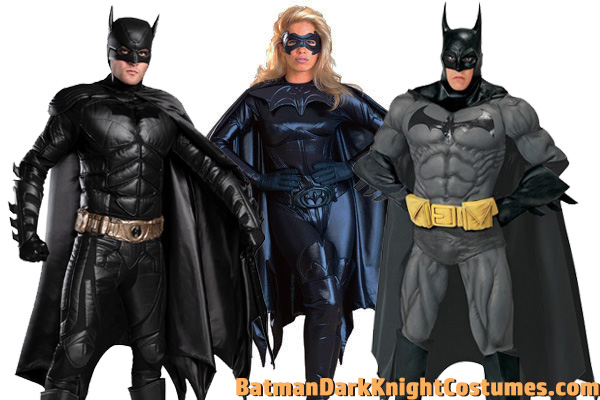 If you are a super fan of the Dark Knight movies and comic books, you will want to suit up in a high quality Batman movie costume this Halloween season! For example, The Dark Knight movie costume features a professionally designed top, pants, satin cape, molded pieces, headpiece, tunic, shorts, belts, gloves, and boot tops. All pieces (with the exception of the cape, shirt and pants) are latex that tie into place. This year we have an updated version of the suit thanks to the new Justice League and Batman V. Superman movies. Manufactured by Rubies, the Dark Knight Grand Heritage costume and Justice League’s Batman Grand Heritage costume are both available but in limited quantities so don’t wait till the last minute!

Available in men size Medium (M), Large (L), and Extra Large (XL) only. This is the ultimate Batman movie Halloween costume that will impress everyone when you go out. This theatrical quality Halloween movie costume is the officially licensed replica of what was featured in Batman The Dark Knight Rises movie franchise. Don’t miss out on wearing the best Adult Batman at your next Halloween costume party! This movie-quality Dark Knight costume is an officially licensed item from the summer movie blockbuster Batman The Dark Knight.

Did you know that The Dark Knight was the first Batman feature that didn’t incorporate “Batman” into its movie title? During production in 2007, the director used codename “Rory’s First Kiss” to keep a low profile from the public and thwart people from leaking spoilers.