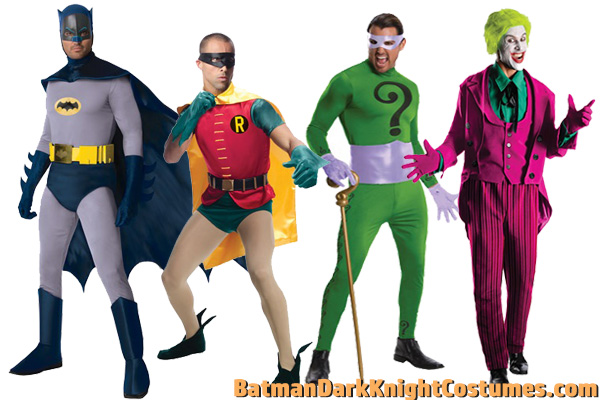 When it comes to popular costumes for Halloween, the big-budget Hollywood superhero movie characters seem to get all the attention but nothing can replace the nostalgia of the classic 1960s Batman characters that you watched on television or read in the DC comic books. Even though the cult favorite TV show lasted only three years (from 1966 to 1968), it produced 120 episodes and made a huge impact on popular culture. So if you are more old school when it comes to Halloween costumes, why not dress up as classic TV Batman, Robin the Boy Wonder, or one of his original villains such as the Riddler, Catwoman, Joker, or Penguin this Halloween? We managed to compile a list of old school Batman TV Halloween costumes that might interest you. Check out these traditional style Batman superhero costumes inspired by the 1960’s television series and iconic actors like Adam West, Eartha Kitt, Julie Newmar, Cesar Romero, Yvoone Craig, Burgess Meredith, Burt Ward,and Alan Napier.