As Robin the Boy Wonder would say, “Holy Halloween, Batman!” Our favorite cosplay season is just around the corner. Although this iconic Gotham City superhero didn’t have a major role in the recent Batman and Justice League movies, avid fans of the original Batman comic book and television series will always remember the famous Dynamic Duo sidekick, Robin the Boy Wonder.  Robin aka Dick Grayson has appeared in many roles over the years such as in the original 1960s Batman TV show, Teen Titans cartoon series, Batman and Robin movie (1997). Now Robin is back as Nightwing in the new live-action Teen Titans television series. If you want to suit up as the cape crusader’s loyal companion Robin for Halloween, we have listed a wide variety of Robin costumes for both kids and adults. We also have the new Arkham Origins, Nightwing, girl Robin, Teen Titans Robin costume as well. Below are some cool Batman’s Robin Halloween costume ideas for kids and men! 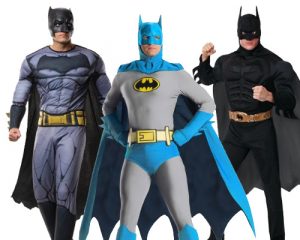 The character Robin debuted in DC Comic’s Detective Comics Issue 38 back in April 1940. He was introduced to us a Dick Grayson, the teenage son and member of his acrobatic family group called The Flying Graysons who performed at circuses. Batman took Dick Grayson time under his wing when his entire family died in a circus accident that was actually set up by the mafia that was blackmailing the circus owner. Batman used Grayson’s acrobatic talents to mold him into his crime-fighting sidekick, Robin, creating the dynamic duo! Robin teamed up with Batman for years until he decided to venture on his own as The Nightwing. Batman moved forward, adopting new sidekicks to fulfill the role of Robin. When Grayson retired, Jason Todd became a new version of Robin in the comic book Batman (issue #357) in 1983. Editor Dennis O’Neil of DC Comics actually set up a poll in 1988 for fans to call in to decide the fate of Jason Todd’s Robin. The poll was set up during the four-part story in comic book Batman issues #426-429. Fans voted to kill off Robin so his character died in an explosion after the Joker severely beat him up. Many fans were unhappy with the results and DC Comics received a lot of hate mail. Afterward, several other characters filled in the role of Robin. These characters included Tim Drake, Stephanie Brown (The first female Robin), and Damian Wayne (the son of Batman and Talia al Ghul). Even though the character is missing in the movies, fans enjoyed Robin’s return to television in both the animated and the live action version of the Teen Titans series!

Robin vs Batman in the Teen Titans television series!